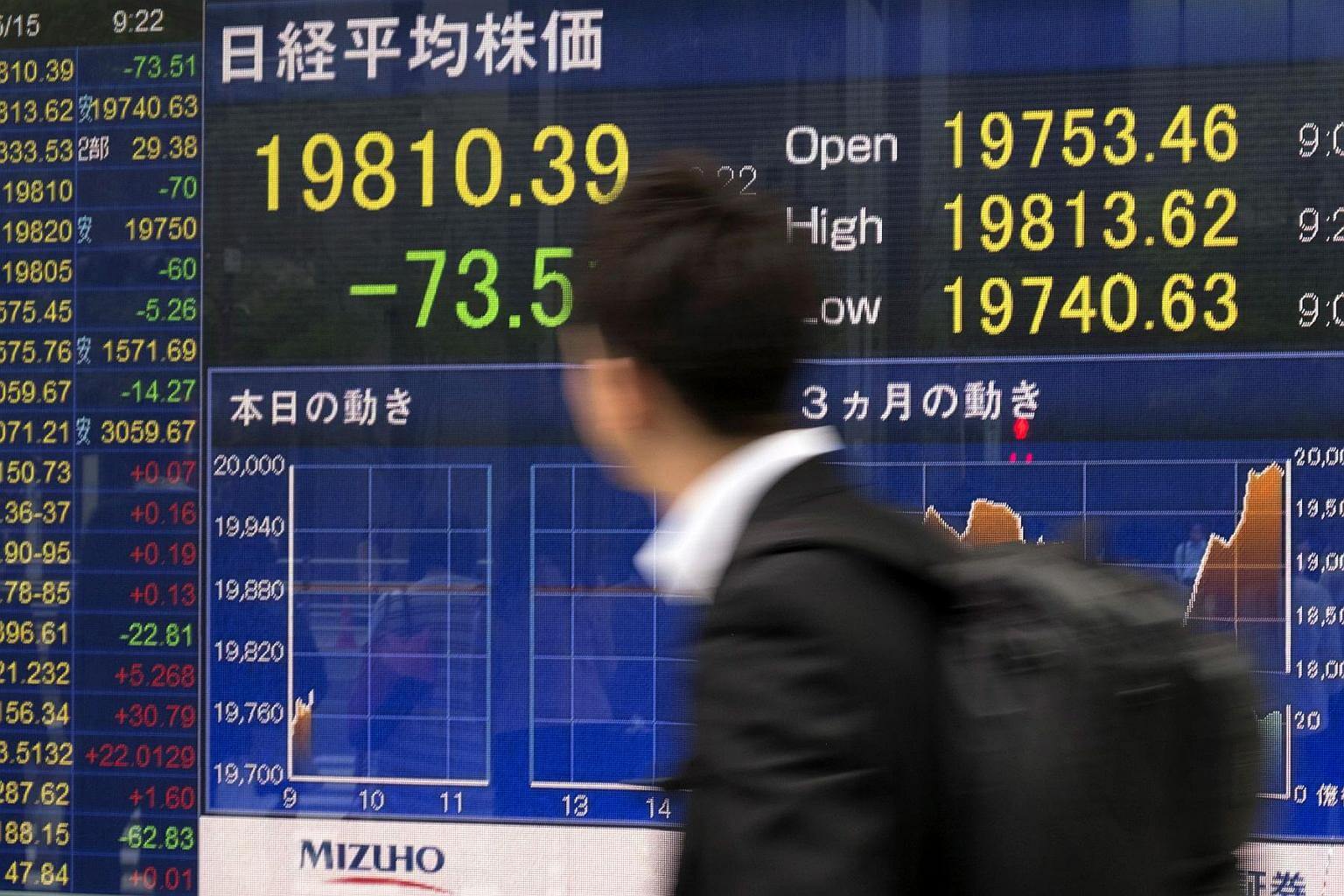 By Reuters : Asian shares lost ground on Friday after a weak session on Wall Street, while global sovereign debt yields were elevated across the board on bets the European Central Bank is moving closer to unwinding its massive monetary stimulus.
Spreadbetters expected Britain's FTSE to open 0.25 percent lower, Germany's DAX to open 0.3 percent lower and France's CAC to open down 0.2 percent.
MSCI's broadest index of Asia-Pacific shares outside Japan slipped 0.4 percent, after the Dow lost 0.7 percent and the tech-heavy Nasdaq fell 1 percent on Thursday, partly as higher Treasury yields dimmed the appeal of equities.
Japan's Nikkei was down 0.5 percent, South Korea's KOSPI dropped 0.3 percent and Australian stocks declined 0.9 percent. Hong Kong's Hang Seng slipped 0.4 percent.
The prospect of the ECB turning off the flow of easy money has been a dominant global market theme since President Mario Draghi's hawkish comments last week, pushing bond yields higher and hurting equities.
The pan-European STOXX 600 fell to an 11-week low the previous day and the German 10-year bund yield rose above 0.5 percent to an 18-month high after the ECB's June meeting minutes showed the central bank opening the door to dropping a long-standing bond buying pledge.
"It is natural for risk assets in developed markets to adjust lower on prospects of curbed liquidity, as easy money has allowed them to rise far out of proportion with their underlying real economies," said Yoshinori Shigemi, global market strategist at JPMorgan Asset Management.
"For the ECB, tapering of easy policy and hiking rates are two totally different things, and it is likely to make this clear. But right now the markets are having a hard time believing the ECB's intentions."
The 10-year Treasury note yield stood near a two-month high of 2.391 percent. With more focus on the euro zone bond market's rise in yields, Treasuries brushed off Thursday's weaker-than-expected U.S. ADP employment data.
"Expectations that the European Central Bank and other central banks joining the Federal Reserve in moving towards tighter policies are causing a diversification of funds away from Treasuries," said Junichi Ishikawa, senior forex strategist at IG Securities in Tokyo.
"The key point is that higher U.S. yields also tend to weigh on high-tech sectors by increasing their funding costs."
The 10-year Japanese government bond (JGB) yield initially reached 0.105 percent, its highest since February.
But the rise prompted the Bank of Japan to act, pushing the 10-year JGB yield back to 0.090 percent. The central bank, which has tasked itself to control the yield curve as a part of its easy policy, offered to buy an unlimited amount of 10-year JGBs on Friday in order to cap yields.
In currencies, the euro was little changed at $1.1418 after gaining about 0.6 percent overnight as Thursday's soft U.S. employment data weighed on the dollar.
The dollar was up 0.4 percent at 113.665 yen as the BOJ's bond-buying operation weakened the Japanese currency. The dollar index was a shade higher at 95.904.
The markets looked ahead to the closely watched U.S. non-farm jobs report due later in the day.
Much focus was on the wage component of the employment report and whether spending by U.S. consumers would be strong enough to back the Fed's intention to further tighten policy.
Crude oil prices slipped after a sharp but short-lived boost from a bigger-than-expected decline in U.S. inventories of crude and gasoline faded.
U.S. crude fell 1.3 percent to $44.65 a barrel and Brent declined 1.2 percent to $47.52 a barrel.
Gold and silver extended their decline with higher U.S. yields denting the allure of non-yielding precious metals.
Spot gold was 0.3 percent lower at $1,220.45 an ounce. Silver was down 0.6 percent at $15.89 an ounce after momentarily dropping to $14.86.